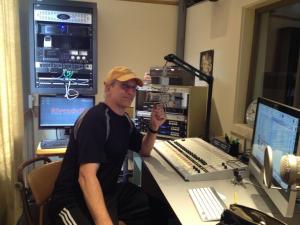 Read our interview with DJ Mike Pollack, in which he talks about what one can’t dance to, the love of two football teams, and the art of question answering. Mike’s show, Progressive Tracks, airs on Monday nights at 9pm.

What can listeners expect to hear on your show?

I play Progressive Rock (or Prog for short), which is a bit hard to define because of all the off-shoots and sub-genres. The sounds range from symphonic to metal to folk to jazz to the avant-garde. But it’s generally a bit more complex and longer than what you hear on popular radio stations – it’s music for active listening vs. background music. Most people relate Prog to the 1970’s and to bands like Genesis, Yes, and Pink Floyd. Well, that was correct back in the 70’s, but Prog is still going strong today…… and it has ‘progressed’. I like to sum up Prog by saying: “It’s all the music you can’t dance to!”

Have you ever regretted playing a song on your show?

I don’t. Some KPTZ listeners might regret some stuff I have played though, you should ask them!

What piece of music do you wish you could play every week?

I like variety, so I’d hate to listen to something over and over. But if you paint me into a corner, it would probably be Jethro Tull’s “Thick As A Brick”, which is a 43-minute epic.

Give us your top three pastimes?

Well, music (listening and concerts) is an obvious one. But other than that, snow skiing (as a participant), and IndyCar Racing, and Unlimited Hydroplane Racing (as a spectator). I’m also a die-hard Green Bay Packers and Denver Broncos fan (I can be both, because one is NFL and the other original AFL………yes, I am THAT old). Gee, that’s 6 instead of 3, isn’t it?

Tell us about your favorite local spot in the community?

My favorite nature spot is Fort Worden…….the gun emplacements, the beach, the lighthouse. My favorite man-made place is probably the Tyler Street Café – I’ve lived and died several times when it’s been reopened, only to close again. Oh, and of course the production booth at KPTZ (to be politically correct).

What other KPTZ shows do you like to listen to?

There are so many great, unique shows on KPTZ, but I like to listen to “Stockholm Syndrome” on Monday nights – there’s always new and interesting music on DJ Alexander’s show.

If you could have a super power, what would it be?

The power to answer questions correctly……